It all began with an oak tree.

When Rachelle Carson-Begley and Ed Begley Jr. bought their Studio City property in 2011, they planned to sustainably remodel the structure. Then they discovered that the shade of a magnificent 100-year-old oak tree to the south would render rooftop solar panels inefficient, and that the aging bones of the house wouldn’t allow for building up and away from the oak’s branches. Starting from scratch was Plan C.

“Though building from the ground up wasn’t what we’d intended, we got a lot out of it,” Ed says. “We could add features to the house that we couldn’t have done otherwise.”

So the Begleys set out on what would ultimately be a five-year project to build the greenest home possible. The couple worked with Los Angeles architect William Hefner, builder Scott Harris and several LEED advisors to ensure that their building choices would garner enough points to achieve LEED Platinum status—a rarity among residential buildings.

Though the home’s self-sustaining features are mostly hidden from view, they are Ed’s favorite talking points. (His journey as an environmental activist began in 1970, when the first Earth Day got him wondering about what he could do to help the planet the other 364 days a year.) The “envelope,” or shell of the house, is made of steel rather than wood, decreasing the amount of trees needed and increasing termite resistance. It is also more energy efficient; the steel layers are spaced in such a way that even when the outer layers heat up, the inner ones keep cool and help maintain temperatures inside.

The interior design also leans green. Light oak floors throughout the entire 4,000-square-foot home are made from reclaimed barn wood. It’s unique and beautiful, lest anyone think that going green has to mean sacrificing style. Nontoxic paints were used on all surfaces, and tiles inside and out are made from post-consumer recycled glass. Bathroom and kitchen fixtures are low-flow products by Kohler. There’s even a Kohler tub in the upstairs master bathroom that’s made from 90% recycled material. 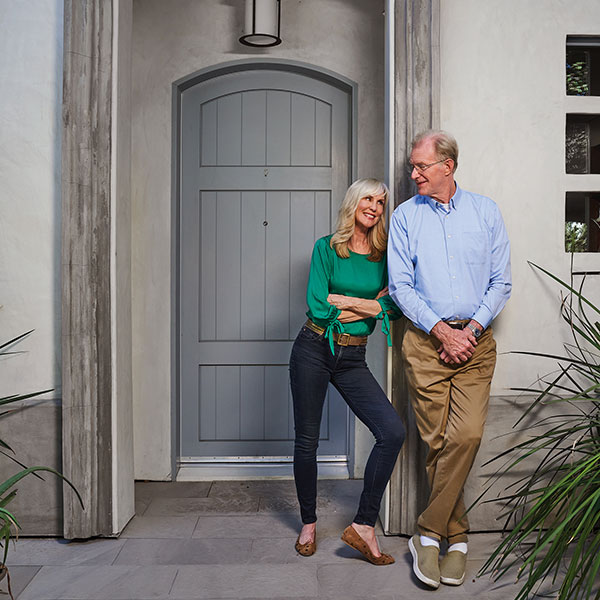 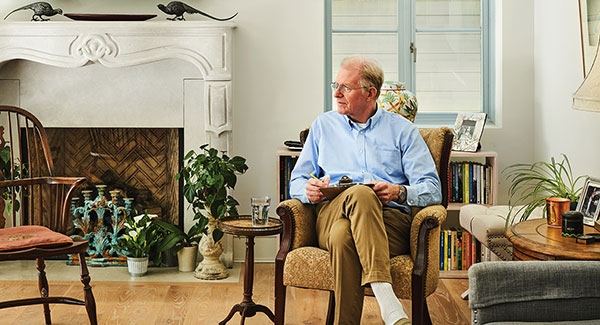 If the tech is Ed’s territory, the decor belongs to Rachelle. Guests enter the home through a gray-blue door inspired by the doors in the French town of Besançon, which bewitched Rachelle when she visited. Inside, Rachelle’s love for art and trinkets—many of them whimsical—make the home especially fun to wander. Works by LA artist and longtime friend Edward Ruscha adorn the walls above an eco-friendly couch made with organic cotton and sustainable wood in the sitting room. A nearby dining table that the actor made himself is surrounded by shelves and carts that showcase collectibles. An entire wall off the dining room is devoted to everyday objects like purses painted with renderings of saints by artist Pam Goldblum (actor Jeff Goldblum’s sister). Art by Val Kilmer and Alison Van Pelt are also part of the couple’s collection.

“There’s no consistency in this house,” Rachelle says with a laugh when asked to describe her decor. “My husband says there’s not a surface I don’t want to clutter. I always have a tableau going.”

Even in the kitchen—which has a remarkably high ceiling, towering glass-paned hanging cabinets and sustainable Caesarstone (quartz) counters bought locally—Rachelle has managed to commandeer space for a tableau. There are Edwardian dishes on display and a distinct wall-mounted ceramic piece by Ojai artist Beatrice Wood. This room is where the family spends much of their time, enjoying meals at the breakfast table that overlooks their wooded backyard with rectangular pool (“We chose that shape so the pool could be covered and retain heat,” notes Ed) and drought-tolerant garden.

Also on this floor is Ed’s book-filled den. Upstairs are three bedrooms and two bathrooms, plus a sunny balcony that extends along the entire back of the house. Furnishings throughout the home are thrifted. Rachelle was a longtime customer of the National Council of Jewish Women Thrift Shop on Ventura Boulevard until it closed during the pandemic (a Burbank location remains open).

As for Ed, he’s happy to inspire others to live sustainably. He is quick to remind anyone who will listen that you don’t need a LEED-certified house; any action you can take is better than no action.

“People today go, ‘I can’t afford solar panels. I can’t afford a Tesla,’” Ed says. “Neither could I when I started. What can you do? That’s the list that’s interesting to me. We’ve got some real problems, but let’s save what we can. Let’s do what we can.” 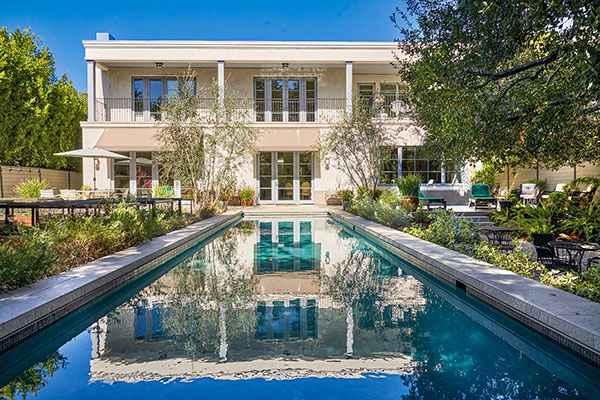